Visit of the Apprentice - Part 2


To: Jen JenniferC.NCPD@gmail.com
From: Lindsey LindseyC.NCPA@gmail.com
Sent: May 19th 20XX 11:27am
Subject: OMG! I got hypnotized!

OMG! OMG! OMG! You’re not going to believe this! I got hypnotized last night!

Now, before you freak out, relax. It was at a stage show, so no reason for you to completely wig out, ok?  But OMG was it so freaky!  Let me start at the beginning. I was over at N.C.U. for the weekend visiting with Jessy and Christine, like usual. Christine had seen a flier for a stage hypnotist who was going to be performing for one night only at the rec-center. She seemed so eager that she practically dragged us there.

I didn’t think anything of it really, I just figured it would be like a comedy show. Although the hypnotist was really cute, blonde, you know the way I like them. *wink* Anyway, of course I had no intention of playing along with this show. But he had us do this test where we had to hold our hands out and look at the space between them. I don’t really remember all of it...is that normal? But before I knew it my hands were locked together. No matter how hard I tried to pull them apart, I just couldn’t get them apart! Christine had the same issue, it was awesome! Next thing I know the hypnotist is saying something about our hands being magnetized to the air on stage and suddenly I’m being dragged by my own hands onto the stage! Christine too!

Read more »
Posted by SleepyHypno at 12:44 AM No comments:

I can haz fan-fiction!

So Bbhaywood did a fan fiction feature Xander and the NCUniverse (which is totally his name that I am completely stealing because that is actually pretty awesome... )!   So I'm going to nerd out and post the link, please take a look at it!

Check it out here!

Posted by SleepyHypno at 10:37 PM No comments:

Visit of the Apprentice, Part 1


To: Thief In The Mind Thiefinthemind@gmail.com
From: Thief’s Apprentice Thiefsapprentice@gmail.com
Sent: May 15th 20XX 10:20 PM
Subject: I have arrived

However should you wish for me to check up on her in any way, simply let me know.

I was lucky enough to stumble across some information online that led me to the names of Officer Cartwright’s sister, and that she usually spends her weekends at N.C.U. visiting friends. I will be able to make my approach there completely without making any contact with the older sister.

I will keep you apprised of my progress and when I am leaving the city for the job in Seattle.

Thank you for your patience, Master.

Read more »
Posted by SleepyHypno at 6:22 AM No comments: 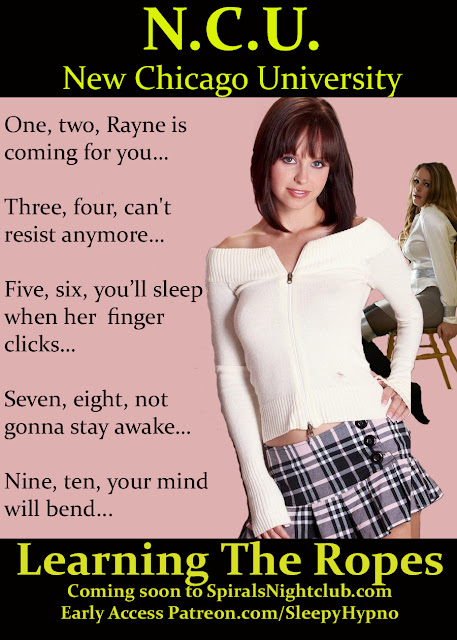 Hit on this idea while talking to my editor (SleepyGirl). Is this something you guys might like to see more often? Little Photoshoped teaser images for the upcoming stories?
Posted by SleepyHypno at 1:40 AM No comments:

Xander pulled his truck into the parking lot of Domes Cave National Park. He had always liked cave diving and crawling around in dark, wet, tight places. (Get your head out of the gutter, seriously!) But today was extra special as he was meeting a friend. He got out of his truck and took about 3 steps before a shadow covered him and a loud flapping sound could be heard as the feminine form of Veo came crashing down into the ground next to him in the perfect ‘superhero landing’ pose.

The angel folded her wings onto her back and stood up with a smile “Hi Honeybun” she said excitedly.  “Thanks for inviting me, how have you been?”

Xander smiled and gave his old friend a hug, it had been about two months since they had last seen one another at the end of their cruise. “I’ve been good, the last few months have been good to me. Done a lot of traveling, met an old friend, even had a bit of a spiritual awakening at another national park.”

Description: While trying to figure out a way to make peace with her roommate, Rayne decides to learn hypnosis. Her first stop on this quest is the library, where she runs into some strangely familiar faces.

Rayne sat on her bed reading the notebook from her psychology class. It had been a week since she found the notes from her first day and still she couldn’t believe what she was reading. “Open yourself up”, the notes started, “experience hypnosis”, “make a decision to be hypnotized now”, “Let your hand raise”, “let it feel lighter and lighter”,  “able to float up into the air.” No matter how many times she read the notes it still didn’t make sense to her.  But still she continued reading on…  “OMG! I can’t put my arm down! What the heck is going on? How is this possible?” “Hypnotized? But hypnosis isn’t real! It’s all fake how can she be…”, “I’m going to be hypnotized? I’m going to be hypnotized! Am I already hypnotized?!  OMG! I’m being hypnotized!  I’m being hypno…” The last part always gave her a shiver.

She had finally come to terms with the fact that the notes were hers. She had written them, there was no question about that. But still, she had no memory of being hypnotized. Just thinking about it, the idea that she was hypnotized somewhere, she assumed in class, by someone made her skin flush with embarrassment and excitement.

Read more »
Posted by SleepyHypno at 9:35 PM No comments: