I Could Usssse a Vacation - Part 2

Description: With Victoria under Kaa’s spell, she lets him into her vacation villa for more of an intimate encounter. (This is a fan commissioned story!)

Victoria walked through the resort with an energetic grin on her face. Her head bobbed softly from side to side with each step that she took, and she even managed to say hi to some of the other guests she passed in the hallway…of course, only if they said hello first. She was responsive, but focused on the task that had been programmed into her mind. The task that she needed to complete. Fortunately no one noticed her eyes, covered by her sunglasses but swirling with hypnotic energy as she made her way to her room.

Her expression didn’t change as she entered her room and moved to the large picture window, opening it about a foot and pulling the blinds down as well. She didn’t know why she did this…but in her current state it wasn’t important for her to know anyway. Then she moved over to the thermostat and flipped the air conditioner off, setting the heat as high as it would go. At 78 degrees, it was much hotter than she usually liked, but for some reason it felt just right to her now.

As soon as her tasks were completed she couldn’t help but feel a wave of exhaustion washing over her. She moved to the chair and sat down, removing her sunglasses as she did...the hypnotic swirls were still visible even through her drooping, half lidded eyes. Little by little the grin on her face slowly faded away while her eyes slid closed and her head fell to the side, landing against the chair. She was too deeply asleep to notice the rustling noise coming from outside the window.

Read more »
Posted by SleepyHypno at 8:52 AM No comments:

I Could Usssse a Vacation - Part 1

Description: Actress Victoria Justice goes for a much needed walk in the forest near her vacation villa. Little does she know that something is watching her from the brush. (This is a fan commissioned story!)

Victoria pushed open the door to the resort lobby with a relieved sigh. It was a beautiful day in early spring, the nights were still cool but the days were warm enough to allow for more comfortable clothing. In this case it was a tight tank top, a pair of equally tight shorts and some comfy shoes.

She had booked herself a vacation at an out of the way resort secluded near one of the national parks. She couldn’t remember the name, just that it had been named after a military general or something...to be honest, she didn’t really care. All she wanted was the ability to get away from it all and get back to nature. Since it was the resort’s off season it was deserted, and those that were there wanted the solitude of the pool...or the bar. Which gave her the peace and quiet she needed to collect her thoughts. Alone, in the forest. What could possibly go wrong?

She adjusted her sunglasses as she headed up the main trail. The air was mostly calm, with only the occasional breeze drifting through the trees, and it was early enough in spring that the leaves hadn’t fully grown in yet. Even though they blocked most of the sun, there was still just enough room for dozens of rays of light to filter through the forest canopy.

Read more »
Posted by SleepyHypno at 10:14 AM No comments: 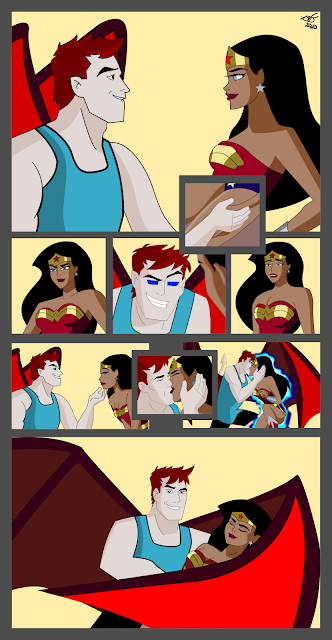 A surprise picture drawn for me by Sergeanthero!
Check out her other work on Deviant art!

Posted by SleepyHypno at 2:03 PM No comments:

His Angel, Her Demon 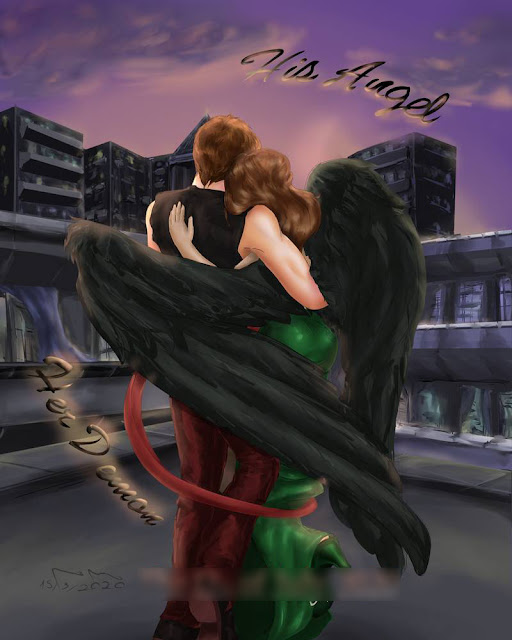 Posted by SleepyHypno at 1:52 PM No comments:

Description: Bridget goes for an interview with a director who has more than a professional interest in her. (This is a commissioned story for DL77 ).

Bridget checked herself in the reflective panel of the elevator as she rode the lift up to the top floor. She was nervous, but you would never know by looking at her. Being an actress had taught her how to put on a good poker face and use it to her advantage. As the doors opened, she stepped out of the elevator and was greeted by a rather bubbly blonde receptionist. “Can I help you, miss?” the receptionist said with a well rehearsed smile.

“Yes…” Bridget began with an equally rehearsed smile. “I was called in for an interview with Mr. Sommeil, something about a part in his newest film.” she finished as pleasantly as possible.

The bubbly smile on the blonde’s face never faded for a moment. If Bridget had looked closer she would have seen the glazed, distant look in her eyes as well, almost as if she were running on autopilot. The receptionist’s hand moved over to the phone and clicked a button. “Mr. Sommeil, your 3 o’clock is here.” she said in a friendly tone.

Moments later a door on the far side of the room opened and a nervous looking man  stepped out. He was in his mid fifties with slick, black hair that had obviously been dyed several times, but wore a genuine smile. “Come in!” he said happily, trying to hide the nervousness in his voice. “Come in, please, miss…” he started before she cut him off.

“Please, just Bridget.” she said, giving him a thousand watt smile.
Read more »
Posted by SleepyHypno at 11:05 AM No comments: